There’s a little mystery surrounding this gown from Rosita, which stars silent film actress (also studio owner and co-founder of United Artists) Mary Pickford. Set in Seville, the film centers around the titular Rosita, a Spanish street singer played by Pickford. Rosita draws the king’s attention with a protest song, inciting a series of arrests, seductions, and near deaths leading Rosita from the slums of Seville to the royal palace. The film touches on themes of class and inequality that are still relevant almost a hundred years later. The gown, one of a number commissioned for the film at Pickford’s request, never appears in the movie, and no one quite knows why. 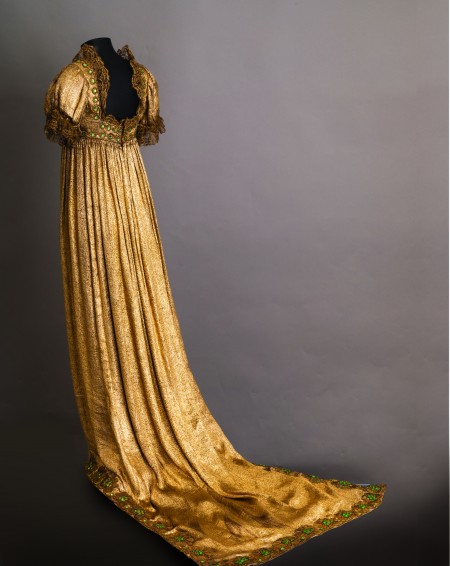 Her gown, on display from May 12 through November 14 2021 in the Becoming Los Angeles exhibition, reflects some of the glitz we associate with the roaring 1920s of Pickford’s day, albeit with an Andalusian sensibility. It’s stunning gold, cinched high but loose directly under the bodice, with the pleated skirt not unlike a golden Corinthian column. One possible explanation for why the gown never appears in the film: It would have been awfully uncomfortable. “It would probably be like wearing a suit of armor made out of sandpaper in the desert,” according to Marina Gibbons, Assistant Conservator. “All of the metal elements of the dress are relatively heavy, stiff, and scratchy. Gold is also heavy, even in very thin layers.”

Another possibility, according to NHM’s History Collections Manager Beth Werling, is that the dress does appear in the film, just not  in the sole surviving print that comes to us via Russia,  and the scene may have been cut by censors there. Pickford gazes warily off camera in the only surviving image of her in the gown. Lips closed, hand to her bodice, she might be on the run or considering the king’s advances. There’s no telling exactly what’s happening in the scene, but this enigmatic gown speaks volumes.