The Hart museum will remain closed until further notice.

A collaboration between the Museum & WriteGirl

Community voices within Museum exhibits bring added value, perspectives, and spirit.  In partnership with WriteGirl, a creative writing and mentoring organization that promotes creativity and critical thinking, the Community Engagement team at the Museum created The Ofrenda Community Project.  Participants received at-home storytelling kits anchored in the ofrenda or altar located in the Becoming Los Angeles exhibition. WriteGirl youth selected an inspiration object in the ofrenda that they felt drawn to and created a memory map based on that object to explore connections and meaning in their personal experiences.  They then crafted their own object to add to the ofrenda and developed a creative writing piece derived from the memory map activity.

Anna's inspiration object was the pair of Armenian dolls placed in the Little Armenia section of the ofrenda, pictured below. These two Armenian dolls are dressed in traditional clothing reflecting the rich cultural heritage of the Armenian people. 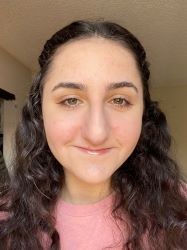 Currently, Anna Arutunian is a high school senior residing in Glendale. She is a Bold Leader at WriteGirl and has been a part of the organization since early 2019; later that same year, she received an honorable mention award from the LA County Youth Poet Laureate competition. Anna is an active member and leader in several extracurricular programs at school, such as being the producer of Broadcast Club and the Vice President of Mindfulness Club. Some of her fascinations include learning as much as possible about language, culture, the humanities, and nutrition. She is a tea and music enthusiast, especially when it comes to matcha and Taylor Swift. In the near future, Anna looks forward to selecting a career that is centered around benefiting others and herself along the way. When not reading, painting, or baking, she can be seen bundled in a warm blanket with fuzzy socks and enjoying a movie with her family.

When I first saw the two Armenian dolls, I was immediately reminded of the dolls I have in my own home in Glendale; they live on what I call my dad’s Armenian shelves. Two mahogany shelves on top of one another filled with all kinds of Armenian knick-knacks, like a mini flag, a map of the country, and a few dolls playing traditional instruments, like the duduk (a woodwind instrument) and the Armenian dhol (a drum). On the wall, there’s two frames with sculpted dolls rolling out lavash (Armenian flatbread) with a toothpick rolling pin. These shelves have been an integral part of my home since before I can remember and I got to see them come alive through places, people, and paintings during my last trip to Armenia in the summer of 2019.

I’d been there a few times before, but those trips were mostly centered around keeping me entertained since I was so young. This time was different…a trip I’ll never forget because I was finally old enough to understand my surroundings. I could fully take in the environment and breathe in my heritage; exhale what I knew from America and inhale the real truth about Armenia.

Sure, I visited all kinds of museums and public displays, but the real focus of the trip was the food. I’m certainly not deprived of Armenian food in America; my grandmother is gifted with the skill to make any Armenian food even more delectable than they sound, everything from napoleon pastries (flaky puff pastry with egg-based custard) to lahmajun (flatbread with minced beef and vegetables with spices, like onions and parsley; we like to call it the Armenian version of pizza). But Armenia is a melting pot of so many flavors, it’s difficult to forget them.

Once we got off the plane we were greeted by some relatives we hadn’t seen in what felt like an eternity. We hopped into the car and went to my great uncle’s house. All the way there, he pointed out certain places we just had to visit during our month-long stay, one of them being the Grand Candy ponchikanots. Ponchik is a popular pastry in Armenia that resembles a custard (or jam or nutella) filled donut. My object represents the mascot that’s imprinted on the hard candy and chocolate wrapper I ate after hours in elementary school, as well as the thick wafer ice cream sandwiches that certainly weren’t stingy with the ice cream. Grand Candy’s products take me back to Armenian summers, sitting on the couch with my cousins eating our cones and chocolates. I was particularly excited to visit the ponchikanots to see if my memories of Grand Candy were personified, which I ended up being right about. We did end up going there, and we ate our sweets with fruit juice to cleanse our palates.

Sevan Beach was a wonderland with a pebbled beach and salty air. After I waded in the water for a while searching for rocks to take home (something I do by default because I love collecting rocks), my great-uncle took us to a restaurant that sold the tastiest baked siga (common whitefish) fish I ever had. Later, we drove up to see the Geghard Monastery and bought freshly dried fruit, ttu lavash (sour fruit leather) and hand-baked gata (sweet bread) with the most intricate designs of flowers, Armenian words, and braids on top.

The visit to the Battle of Sardarabad memorial was also unforgettable. Before we visited the museum, my mom spotted a plethora of apricot trees in the distance. Knowing we would get in trouble for picking the fruit off the trees, but wanting a taste anyway, we dashed to the trees and filled my mom’s purse with as much as we could. We did end up getting caught, but it was worth it in the end. When we got home, the apricots lasted a good number of weeks, the sweet fruit juice always making sure to seep out and dribble down the chin. After touring the museum that had lots of breathtakingly stunning artifacts, we saw a small restaurant that made khorovats (smoky barbecue grilled meats/kebabs marinated in vinegar, oil, spices, peppers, and more) and we stuffed our stomachs with all the lamb, bread, and sauce they could handle.

However, one of the most prominent memories from the trip is when I touched the sky in the town of Tsakhkadzor. The sun seemed angry with us that day; the rays seemed to melt off our skin even from the parking lot where the car waved us goodbye. We hopped on a smooth ride up a sky lift, rising up the mountain, and watched the violet flowers and moss patches smile at us while the sun continued to shout. We ignored the sun the entire way up, smiling at laughing with each other. In fact, we laughed at the sun’s face when we drank scalding mint and thyme tea in the blazing heat. And with that we floated down again.

Even the little things stood out to me – feeling nauseous at times and being advised to consume nothing but bulki (raisin bread) and sparkling water – going down to the quaint market just outside the apartment and buying produce or sunflower seeds to snack on – picking off blandly sweet black and white mulberries from the tree outside the apartment in the pouring rain – visiting the biggest grocery store and seeing what average Armenian citizens would buy. There, we bought a shakar aklor (translates to “sugar rooster” in English) for me to try, which is exactly that: a rooster-shaped lollipop. My mom and grandma would tell me it’s a snack from their childhood and when I ate it, I felt connected with not only the country, but my family too. It was a month of happy bellies and new connections as souvenirs.

Anna documents the making of her ofrenda object

Drafting ideas on what to write, from nature/scenery to tradition to food.

Painting white on top of the base of the sculpture.

Scattering dirty brushes everywhere while painting the base.

Using a toothpick to fix the finishing touches on the “sugar rooster” lollipop. (I used a hair dryer to make it dry faster.)

Gluing down the Grand Candy elephant sculpture and other elements.

The finished product — Grand Candy mascot with a cup of mint tea and lollipop, representing the food and culture of Armenia.

Drafting ideas on what to write, from nature/scenery to tradition to food.

Painting white on top of the base of the sculpture.

Scattering dirty brushes everywhere while painting the base.

Using a toothpick to fix the finishing touches on the “sugar rooster” lollipop. (I used a hair dryer to make it dry faster.)

Gluing down the Grand Candy elephant sculpture and other elements.

The finished product — Grand Candy mascot with a cup of mint tea and lollipop, representing the food and culture of Armenia.