It's been ice ages! Get reacquainted with your friendly neighborhood apex predator

Walk in the paws of a saber-toothed cat that once roamed the same turf where La Brea Tar Pits visitors are daily planting their feet. From saber to stern, here's a basic bio of Smilodon fatalis, ice age L.A.'s famous feline.

In the same mid-Wilshire spot along Hancock Park where Homo sapiens, like yourself, traverse today, this big cat was licking its paws after an ice age afternoon snack. But this colossal predator's appetite didn't always work to its advantage. Chasing prey through the Pleistocene landscape led scores of saber-toothed cats into the asphalt seeps, a gooey deathtrap. We know this because we have evidence of thousands of years of hunts preserved in tar, including the fossilized bones representing more than 2,000 saber-toothed individuals! The immense number of these found at the Tar Pits helped secure Smilodon fatalis as California’s state fossil!

To glean more information about the diet and the environment of these and other Ice Age creatures, researchers use collagen preserved in the asphalt to conduct isotopic studies and carbon-date the fossils to determine their age. The millions of fossils in La Brea Tar Pits collections even offer clues to the mystery of why Smilodon went extinct around 11,000 years ago, at the end of the last ice age.

How did Smilodon stand up against other long-gone big cats?
At about five feet long and three feet tall and weighing between about 350 to 620 pounds, it was a contender!

A coat of many colors

We have no preserved fur of Smilodon, but like ginormous cats today, their coat color and pattern probably helped them blend into their environment (the better to sneak up on you, my dear!).

Cats whose habitats are well-lit are more likely to have plain fur coats.
While we don’t know if there were ever such fetching coats as these, carnivores like tigers and leopards roaming forested habitats today do sport spotted, vertically striped, and horizontally striped fur as camouflage.

Fossils tell scientists that saber-toothed cats were ambush predators who waited for the right moment to surprise their food, then used their strong front limbs to hold their prey down. We know this from both the shape of the bones (super-robust forelimbs) but also from the super cool paleopathology research led by folks on the La Brea Tar Pits team, showing where these mighty cats got injured. La Brea Tar Pits researchers analyzed thousands of bones and found evidence of battle wounds on the shoulders and lumbar vertebrae (lower back), traumatic injuries sustained from all that hunger-fueled pouncing and pinning.

Fossils also can help us figure out how S. fatalis used its long, serrated canines as a hunting aid. Since scientists don’t find many teeth that broke during the cats’ lifetimes at La Brea, the canines likely helped them deliver an initial puncture wound to a soft spot on prey, rather than use its sabers to grab and hold on.

The skinny on the sabers

The elongated sides of Smilodon fatalis's cranium show just how wide of an area there was for muscle attachments. Muscles connected from there to the lower mandible would help that jaw stretch open! Like most cats and dogs, saber-toothed cats had carnassials. These pairs of specialized teeth on the upper and lower jaw work together like meat-shearing scissors. Saber-toothed cats could open their jaws up about nearly 120 degrees wide, compared to 65 degrees for lions. These canines had serrated edges, like steak knives! The overall shape of the canines, though, meant they could break more easily than the more robust canines of other cats. While it had a wide mouth opening, Smilodon had substantially weaker bite force than modern lions.

Open wide! This saber-toothed cat skull with jaws open demonstrates the length of the canine teeth.

For more juicy morsels about this and other Ice Age Angelenos, head over to the Tar Pits, where excavators are digging up new fossil bones each day. Step inside the museum and we guarantee more sightings of this legendary cat. 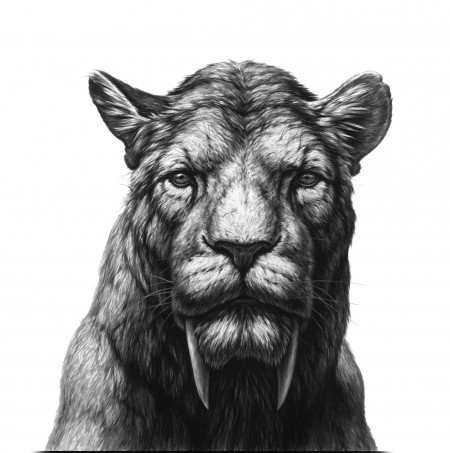